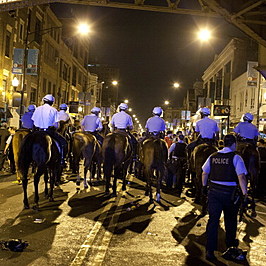 CHICAGO (AP) — The party goes on for the Chicago Blackhawks.

Hours after returning from their 3-2 win over the Boston Bruins, the team has been giving fans a close-up look at the Stanley Cup, hauling their prize around to bars and restaurants around the city.

Team members greeted cheering fans with high-fives as they filed into The Scout bar in Chicago's South Loop. TV news helicopters hovered overhead as they followed the bus and limos ferrying the players and their families around town under a police escort.

Earlier, the team was greeted on the tarmac at O'Hare International Airport with a water cannon salute from about a dozen fire trucks and even more police cars — all with their lights flashing.

Filed Under: blackhawks, chicago
Categories: Sports
Comments
Leave A Comment
What the Heck Can You Do When You are Craving White Castle?
All The Best Whataburger Sale Memes On Twitter
Commentary: Smollett Story Didn’t Add Up
Amarillo Makes The List At #1 For Windiest City In America
Blackhawks Beat Lightning to Win 3rd Stanley Cup in 6 Seasons
Jets Fans at the NFL Draft in Chicago Boo Babies, Dogs & Just About Everything Else [VIDEO]
Salvage Crews Begin Dismantling Derailed Chicago Train
Commute Resumes In Chicago After Train Crash
Board Rejects Clemency For Condemned Ohio Killer