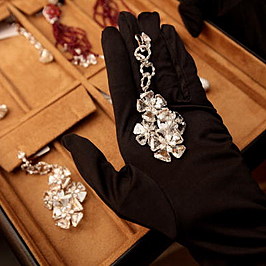 PARIS (AP) — A state prosecutor says the organizer of a diamond exhibit and sale has more than doubled the estimated value of diamond jewelry stolen in a brazen weekend heist at a luxury hotel on the French Riviera — to some $136 million.

Police had previously said Sunday's theft at the Carlton Intercontinental Hotel had netted €40 million ($53 million) in loot — even at that level, one of biggest jewelry heists in recent years.

Assistant prosecutor Philippe Vique said the Dubai-based organizer of the diamond show has raised the value based on a more complete inventory.

Vique said authorities are looking for a lone suspect who broke in through French doors at the hotel that opens out onto Cannes' famed Croisette. The suspect then fled on foot.