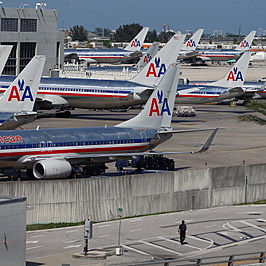 FORT WORTH, Texas (AP) — Creditors are approving the bankruptcy reorganization plan for the parent of American Airlines.

The OK gets American one step closer to emerging from bankruptcy protection in a planned merger with US Airways.

AMR Corp. said Thursday that at least 88 percent of the ballots show approval. More than 99 percent of shareholders have approved the plan.

The bankruptcy plan still needs approval from a bankruptcy judge. A confirmation hearing is scheduled for Aug. 15 in New York. The deal with US Airways also needs antitrust approval.

AMR filed for bankruptcy protection in late 2011. Since then it has cut labor costs and ordered new jets to update its fleet. It is aiming to come out of bankruptcy and close the merger with US Airways by the end of September.

Filed Under: american airlines
Categories: News
Comments
Leave A Comment
Back To Top