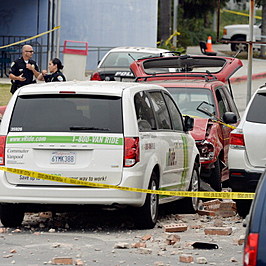 NEW YORK (AP) — Police and fire officials say eight people have been injured, one of them critically, after a car jumped a curb and slammed into a Manhattan store.

The white car hit the 24-hour grocery in the East Village around 7 a.m. Wednesday.

One witness, Rafael Fuentes, says the driver lost control about a block away and plowed through everything on the sidewalk.

Another witness, Najava Stone, says people were hurt by flying debris. He says the car spun before landing in a crosswalk.

A fire hydrant landed down the block. A large tree and a street sign were down. Outdoor refrigerator cases were overturned.

Flowers were strewn on the sidewalk and on the crumpled hood of the car. Its front windshield was cracked and the back window was destroyed.

Filed Under: nyc
Categories: News
Comments
Leave A Comment
Back To Top
The 2020 Sheriff's Citizen Academy Is Accepting Applications